The class VI drop-out earns at least Nu 8,000 a month by making bows and arrows. When Damphu town in Tsirang saw some sun after several days of light rain, it was time for Raju Gurung to work on his hobby again - making traditional bows and arrows.

With a sack full of slim bamboo sticks (Yangka, jalasam, sibrum), a lamp, a bunch of silk yarn and white cello tape, he sits outside his house at the Department of Road’s camp above the forest check post in Damphu and got busy. 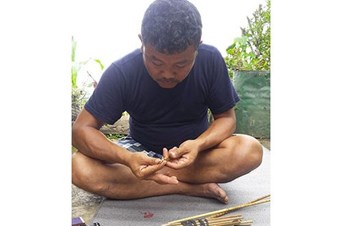 Although his work uses simple materials, serious concentration is required. In just an hour, he deftly makes a pair of traditional arrow and a bow using his bare hands.

He said that even though he can make a set of traditional bow and arrow quickly, he rarely gets time to do it. He claimed that he can produce at least 10 pairs of arrow in a month.

“Making the arrow takes more time while making the bow is easy, it can be done quickly,” he said.

To earn a living, Raju Gurung works as a driver for DoR and remains occupied even during the weekends. Even though he has received orders from archery players, he cannot always cope with demands as he does not get enough time to sit down and work on his craft.

Where does Raju source for materials used in making traditional bows and arrows?

According to Raju, buying from villagers who cultivate the arrow material in Jala is cheaper for him. He also revealed that gathering the raw materials is tedious. Take for instance, the bamboo used for making the arrows are brought from Jala in Wangdue and also from the market in Thimphu. For the bow, regular bamboo is used. He buys it from Semjog, Patshaling and Barshong in Tsirang. Depending on the quality of the bamboo, a pair of traditional bow and arrow set can sell for between Nu 80 and Nu 500.

Raju is also an avid archer

It does not come as a surprise that with his passion for making traditional bows and arrows, Raju holds a record of hitting 13 karays in a day in an archery competition. He also broke the record in March 2014 during the Jigme Dorji Wangchuck archery tournament in Changlingmithang.

His interest in archery started in 2005 when he began his career as a driver with DoR in Sengor, Mongar. Back then, archery for Raju was all about entertainment and spending time with his friends on his days off work.

With his interest in archery piqued, the father of two took the sport more seriously and began playing in tournaments in 2008. However, after two rounds of the first tournament, he was too nervous to continue.

“I dropped out and could not play for a year. However, it was in the fourth match that I broke the record,” he said.

Despite making archery equipment as a side-job and hobby, Raju actually thought that “it is more of strength than the bow and arrow that makes a difference in the archery ground.”

The Vanishing Art Of Pottery Making In Bhutan

60-year-old Tshewang Choden is the last surviving potters in Gangzur, a village that was once known for pottery making.