Once upon a time in a land far, far away (jungle near Varanasi), there lived four friends: a bird, a rabbit, a monkey, and an elephant. They lived together happily, in agreement that there was a lack of respect in the world, especially from the young to the old. Thus, they were determined to show each other respect, as per the tradition of the Dharma.

The four animal friends lived by a big fruit tree. They wished to find out who was the oldest among them, and did so by measuring their age with the tree.

Hence, they deduced that the bird was the oldest, followed by the rabbit, and then the monkey. The elephant was the youngest among them.

From this part of the story, we learn that respect does not necessarily belong to the biggest in size and strength. While the elephant was the strongest and largest, the highest respect was given to the bird because of its seniority.

And when we assign respect to one another based on age, using it as a measurement of the person’s life experience, it acts as a guide that maintains harmony in the community. Nonetheless, age is not always the best indicator of a person’s character and wisdom, which is why among the monks, respect is accorded based on the number of years a person has been ordained, and not the person’s actual age.

One day, the four friends decided to set out to make offerings and pay homage. Each of them carried the older one on their back. Thus, the elephant was at the bottom, with the monkey on top of it. The rabbit perched on top of the monkey, while the bird rested on top. 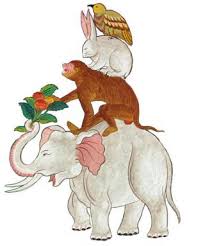 The bird taught the other three friends to follow several moral conducts. They were not to take lives, not to take what wasn’t theirs, never to lie, nor to conduct sexual misconduct. Each of the animals guided the other animals of their own species to follow these values too. Soon, there was happiness and comfort in the world.

At the same time, the king and his subordinates were under the impression that they themselves had earned the good times they were enjoying. In an attempt to learn the reason for their happiness, they sought out a hermit.

The hermit, who had clairvoyant abilities, related to his guests that the country was prosperous not because of the merit of the people, but because of the four animals in the forest who guarded the five tenets of moral conduct, influencing the other animals to follow the same path. The hermit advised the people to learn from the animals.

As a result, most people of the area watched their moral conduct and were reborn in the deva realm after death.

Another version of the story

In another version of the story, only the bird was present in the beginning, and the tree was only a tiny sprout, thus the bird could easily reach the plant to gather the fruits for food. But as the tree grew, it became more and more difficult for the bird to get food, as it was unable to fly.

Then along came the rabbit. The rabbit would eat off the ground and lift the bird up so that the latter could reach the fruits. This way, they could both fill their stomachs.

Sadly for them though, the tree continued to grow, and soon, the bird couldn’t reach it, even on the back of the rabbit. But fortunately, along came the monkey. The monkey climbed the tree and dropped the fruits on the ground for the rabbit and bird.

Nonetheless, this didn’t always work, because getting the fruit at the very top of the tree was a challenge, at least until the elephant came along. The elephant could easily reach the fruits at the top of the tree, so there was plenty of food for everybody.

The dynamics the animals shared worked because none of them were concerned about themselves and instead prioritised helping others get what they needed. On top of that, they were not shy to ask for help and receive help when they needed it. In this way, the bird behaved at the ideal since it was more vulnerable than the rest and needed the most help, but was not shy to ask for it. From these friends, we can learn the importance of interdependence.

Origins of the story

This Buddhist tale is popular throughout Tibet, Mongolia, and India. It likely originated from Jataka Tales of the Buddha. According to some sources, the story can be found in the first section of the Kangyur.

No matter where the story first appeared, the values are long-lasting. May we aspire to emulate the four friends, helping each other selflessly, for friendship and with respect.

A parable steeped in Buddhism, the didactic tale of the four harmonious friends is regarded as the national folklore of...