Bhutan is a bird-watcher’s paradise. To date, 700 species of birds have been discovered in Bhutan with more to come. The current known species include waders, ducks, thrushes, birds of prey, finches and buntings — thanks to the large areas of forest cover, the bird kingdom in Bhutan is thriving.

In the same vein, Bhutan is home to many endangered birds, each fascinating in its own right.

To date, there are 26 endangered birds in the Kingdom. They are: The Baer’s Pochard is an extremely rare diving duck. Its head has a dark green gloss, but normally appears as dark brown or black. Their sides have boldly patterned chestnut-and-white shades that are unique among ducks. You can usually find them on large open bodies of water during the winter. Black-necked storks are large in size. They have a black beak, black head, and black neck. To find them, look in tropical wetlands and ponds. A dark dabbler with a needle-sharp bill — that’s the sikkim wedge-billed babbler. They have a scaled appearance with an arching pale brow stripe. These birds can be found in areas with dense damp undergrowth. 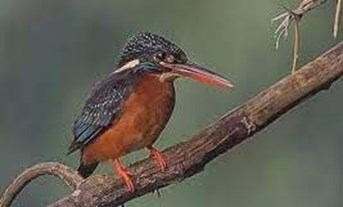 Blyth’s kingfishers are a larger version of the common kingfisher, except they are a darker shade and have no orange behind their ears. Its beak is heavy and a dark colour, causing the bird to appear heavy-headed. These birds are often found in areas with dense bamboo stands. They have a dark-rusty red chest and head, and there is a black-and-white ring around their neck.

The dark-rumped swift has fork tails, but what sets it apart from other similar birds is its dark face and dark rump. They breed in damp forested hills with waterfalls, steep cliffs, and ledges. Meanwhile, they forage in other habitats as well. These are large shorebirds with a brown body, a long curved beak, and mostly white underwings. You may find them in grasslands and marshes. The Eurasian peregrine falcon has a bluish-black head and wings. Their underparts are pale with spots or barred markings. The females of the species are larger than the males. An orange belly, a white face, and stunning blue bandings on its wings — these are the hallmarks of the beautiful nuthatch. These stunning birds can be found foraging in primary forests. The ferruginous duck has a rich rusty-brown appearance with a white triangular patch under its tail. It also has a peaked crown and a long grey beak. The grey-crowned prinia is small, stumpy, of a warm brown colour, and has a gray crown. These birds have a restricted range in the south-central and southeastern Himalayan foothills. They can be found in grassy or shrubby forest edges. The great hornbill has a large, curved yellow beak. Its black face and wings contrast its white tail, belly, and neck. Gray-brown in colour with piercing yellow eyes and a white belly, these birds can be found in fast-flowing foothill streams and rivers. They can also be found in lowland lakes and wetlands. The pallas’ fish-eagle has a pale head, a broad white band, and a dark tail. It can be found in inland marshes and lakes. For this bird species, the male is a ghostly grey shade on the top with black wingtip wedges, while females look similar to other harriers. Pallid harriers are found in steppes, wet grassland, and agricultural areas. The rufous-necked hornbill has broad dark grooves on its upper beak. Males of this species have a reddish-brown head, neck and underparts, whereas its females are black in colour. A grey face, scaled chest, and bright orange throat — that’s a rufous-throated wren-babbler. You might find them in gullies, ravines, and valleys that have extensive cover. For this species of birds, the females are brown with thin white streaks on the back, and have reddish-brown wings. Meanwhile, the males have a black face with a dark blue chin. Its back and upper tail is grayish-brown. Because of its small head and prominent rings around its eyes, the ward’s trogon looks like it is permanently surprised. The females of this species are brownish and have a yellow cap and underparts, whereas the males have a wine-purple back, a scarlet belly, and a red forehead. The white-rumped vulture has a silver beak and a dark body. When in flight, a thick and long white slab is visible below its wings. Like many other species, the female and male white-throated bushchat look slightly different. The male has a black head, white collar, and a splash of orange on its chest. Meanwhile, the female is of a browner shade, has a white throat, and is generally more warm-coloured. This is a rare snipe, with intricate black, brown, and white patterns all over its body. You may find them in wet alpine meadows where they breed, or pools and marshes where they spend the winter. The yellow-rumped honeyguide is dark brown with spots of yellow on its head and rump. They are often spotted near the nests of Giant Asian Honeybees, from which they take beeswax. The black-necked cranes have a pale body and a black neck, as per the name. On their head is a patch of red skin and they have elongated feathers above their tail.

In November every year, the Bhutanese celebrate the Black-necked Crane Festival to create awareness on protecting the endangered black-necked cranes. During the festival, they sing folk songs and perform dances with a black-necked crane theme. School children also stage skits on environmental conservation. This species of herons are extremely rare. They have dark grey wings, a pale throat patch, and a white belly. Listed as critically endangered on the IUCN Red List since 2007, its total global population is estimated to be only 50-249 adult birds, and numbers are declining even further.

However, for the first time in 19 years, no white-bellied herons were sighted in the Pochu and Mochu river basins in the Punakha district, which once hosted the biggest and oldest known population in Bhutan. The blackish-breasted babbler is dark in colour and has a scaly appearance. To spot one, try the lower and middle levels of a broadleaf hill forest, especially areas with dense damp undergrowth.

Intrigued by these magnificent birds?

Consider adding bird-watching to your itinerary in Bhutan. In Tsirang, you’ll find a bird-watching point near Sankosh bridge, just above the national highway. There, you’ll stand a chance to see the rufous-necked hornbill and great hornbill, amongst other birds.

The best time for bird-watching in the Kingdom is September to May, when the migrating birds fly southwards to Bhutan for the winter. Of the many bird species in Bhutan, around 50 of them are winter migrants. By February and March, they fly north to Tibet and Mongolia once more for the summer.

Nevertheless, with approximately 700 species of birds in Bhutan, there is always something to see all year round. Even during the monsoon season that stretches from July to September, you can get some good bird-watching in.

Translation of His Majesty's Address to the Nation...

A wildlife biologist from Bhutan has won a prestigious Whitley Award for his lifelong work to preserve the rare alpine...