A Run Unlike Any Other, Get Up Close With Charming Locals And The Magic Of Bhutan’s Highlands In The Laya Run Senior researcher and strategic adviser for the Tarayana Centre for Social Research and Development, and associate professor College of Language and Culture Studies, Royal University of Bhutan. Parts of this article were previously published in Tashi Delek, the inflight magazine of Drukair, Royal Bhutan Airlines.

If you have not visited Laya or the Highlands of Bhutan yet, this is a great opportunity to do so. In its third year now, the Laya Run is a much-loved staple on the Bhutanese calendar.

The Royal Highland Festival will take place in Laya this year on October 23 and 24. If the first two years of the festival are any indication, this year will be likely be even more enchanting and action-packed than before.

The festival always happens in conjunction with the much anticipated Laya Run. The third edition of the Laya Run will take place on October 23 from Panjothong to Laya. Covering a total of 25 kilometres over one day, it is considered one of the most scenic high-altitude runs in the world.

Both the Laya Run and the Snowman Run follow the epic Snowman Trail. While the Laya Run is a hard yet fun-filled one-day race that almost anyone can take part in, the Snowman Run is intended for the hard-core, high-endurance runners. It has drawn global attention from adventure racers from around the world. 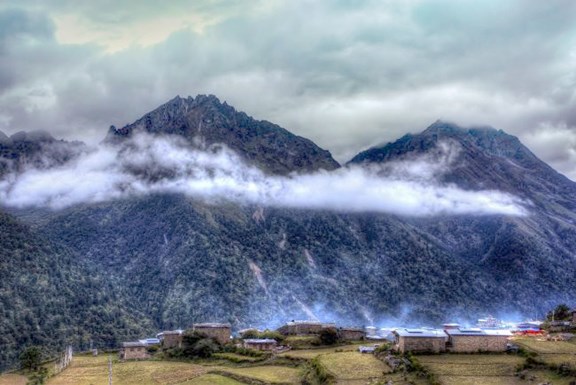 The first, second and third Laya Runs are the pilot and precursor for the epic Snowman Run, which is expected to be scheduled soon.

Slated to be one of the most challenging and gruelling ultra-endurance high-altitude race in the world, it will likely cover a distance of approximately 230 kilometres. Although the route has not been finalised yet at the time of writing, a preliminary routing has already been drawn up.

To get an idea of what one might expect, a possible route indicates an extreme elevation gain of approximately 13,140 metres covering five passes over 5,000 metres (the highest is at 5,264 meters), 7 passes over 4,400 metres, with many steep ascents and descents.

The trail that will eventually be covered by the run has been referred to by some international trekkers as “the world’s worst trail” due to its difficult and rugged nature. Far from “glamping”, runners will likely run all day and night, resting when they want to and are expected to carry all their own gear.

All of these challenges to be surmounted in extremely remote areas with no mobile coverage, motorable roads and very little civilisation save a few remote yak herder villages and yak enclosures.

Although a self-sufficient race, it is expected that less than half a dozen stations will be set up to provide food, tented shelters and rations of water for those who choose to avail of it.

Most importantly, this prestigious and challenging race is not only expected to epitomise the toughest high-altitude endurance race in the world. It also champions the important cause of combating climate change for the future of our planet, and its fragile mountain regions which provide water and other natural resources to sustain life and all sentient beings.

Possibly the most anticipated ultra-endurance, high-altitude race in the world, the Snowman Run will ultimately showcase highland culture, a unique way of life and the threats it faces from climate change, development and tourism.

Run for a Cause, tread lightly and be mindful of local environment and communities

The famous saying “take only memories, leave no footprints” aptly describes the spirit of the Royal Highland Festival, Laya Run and the epic Snowman Run. The intention is naturally to have fun, push your limits within the setting of competitive racing, and challenge yourself.

The Laya Run and the Royal Highland Festival, in the majestic setting of Laya, has begun to draw attention to unique, special and less frequented locales in Bhutan. With the ability to visit such fragile, culturally preserved communities comes great weight and responsibility.

Whether you are a visitor, tourist, traveller, observer or runner, it is critically important to tread softly and gently, while being mindful and respectful of the highlanders who generously open their communities and homes every year as the festival becomes a much-anticipated event.

Tshechus (Festivals) In Bhutan Becoming A Platform For The...

"The impact will be a thousand times more powerful. When a spiritual figure conveys a social message in line with...