Bhutan played Malaysia in the finals of the Quadrangular cricket series 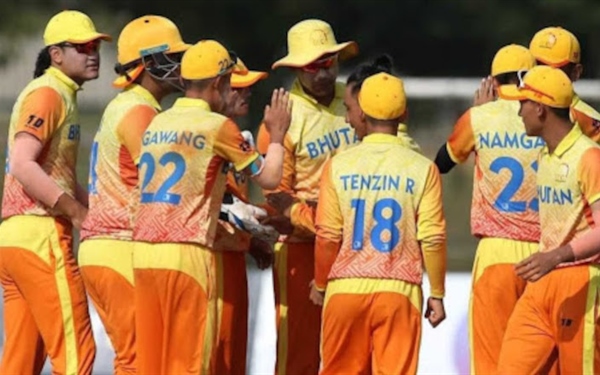 On 11 July 2022, Bhutan’s national cricket team lost to Malaysia in the finals of the T20 Quadrangular Series 2022. They lost by nine wickets. The tournament was held in Malaysia.

The team had won four consecutive games to book a place in the finals. However, they failed to overcome the host Malaysia over the games played throughout the tournament, the other two matches of which were played on July 2 and July 3 respectively.

Nonetheless, the Bhutanese are proud of what they have achieved this time. They beat Thailand and Maldives twice each, and gave the Malaysians a run for their money in the second league game. In fact, the team started the tournament at number 76 in world rankings and finished at number 58. They are satisfied with their achievement as they have not played any international cricket over the past three years.

According to team captain Jigme Singye, credit went to their new coach Trisane Nonis, who has been instrumental in the growth of the team. The team members have also sacrificed a lot for this tournament, with some dropping out of school to train and office-workers showing up for practice every other weekend. The players train in Gelephu, where they live away from their families.

The history of cricket in Bhutan

In 1999, Bhutan was introduced to cable TV, and with that, access to cricket tournaments. There are reports of the game being played in the southern border towns prior to the 1990s, but it was only later when the game made its mark in the Kingdom.

Now, the Bhutanese could watch cricket on their screens from the comfort of their living room. This sparked an interest among the Bhutanese, and soon, they started to experiment with the game. Those who had studied in India prior to this already had exposure, and they were among those who started playing regularly in Thimphu, even organising tournaments. The cricket fans went on to form a cricket board, despite the serious lack of funding. In 2001, they applied for International Cricket Council (ICC) membership and became official members in 2003. They hired their first international coach from Sri Lanka, and the rest was history.

Just one year after their debut, Bhutan chalked their first win as a team when they beat Iran at the ACC Trophy Game, an impressive feat.

Cricket in Bhutan has come a long way since those early days. Now, more and more people have taken a liking to the game. As recent as 2019, only six out of the 20 districts in the country had people participating in the sport. But a check in 2021 showed that the sport was now played in 12 districts.

Currently, cricket is the fastest growing sport in the Kingdom.

The Bhutanese know the importance of starting them young. There are cricket tournaments for the U-13 and U-19 age categories.

There are more than 50 cricket tournaments a year in Bhutan, organised in the hopes of identifying talented players to groom, especially from the U-16 category.

Right now, their issue is funding. The Bhutanese rely on ICC and ACC (Asian Cricket Council) for financial support, as well as a little from the Olympic committee. They also partner with UNICEF Bhutan to conduct youth programmes, with the goal of promoting the sport among the youth. That said, the limited funds has not stopped them from professionalising their women's cricket team. The women are provided with coaching, food, accommodation, and physiotherapy, so they can just focus on cricket. If the women are able to yield positive results, they might consider offering the men the same setup too.

Barriers to the progress of cricket in Bhutan

Tucked away in a tiny corner of the Himalayas, Bhutan’s topography is great for mountain biking and trekking. Sadly though, finding flat ground to build a cricket field is tricky. Flattening land for the cause can be costly.

Thankfully, the Bhutanese found a small strip of flat land in the south of Bhutan next to the border with Assam, building on it the Gelephu Cricket Ground. There are six turf pitches and the surrounding spectator area can hold about 5,000 people.

Unfortunately, the journey there from Thimphu takes seven hours by car. A cricket stadium in Thimphu will be ideal, and the Bhutanese are looking to make that happen. Some land has been put aside in Thimphu, but money is the problem now.

The good news is that the Indian government has responded positively to the request to build a Bhutan-India Friendship Cricket Stadium.

Bhutan’s cricket goals for the future

Bhutan Cricket Council Board (BCCB) Chief Executive Officer Damber Singh Gurung has listed out Bhutan’s goals. Firstly, he would like to continue promoting cricket to the Bhutanese people. Secondly, he wants Bhutan to be consistent in their progress in the game, with the hope of playing in future world cups.

Last but not least, he wishes to launch cricket tourism. Bhutan is a popular tourist destination to begin with; now, Gurung wants to add cricket to the equation. With good infrastructure, international teams could come to Bhutan for pre-tour preparations, matches, and high-altitude training.

From the looks of it, Bhutan is on the right track.