On December 22, 2021, the Bhutan Football Federation (BFF), a bronze member of the AFC Grassroots Charter,presented awards to unsung heroes who have contributed to the growth of the football scene in the kingdom. 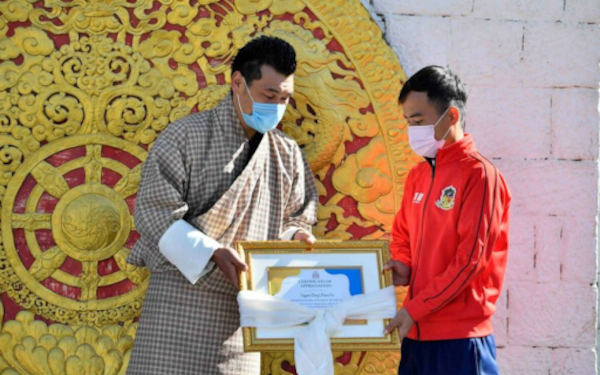 The BFF Grassroots Football Awards 2021 seeks to acknowledge the achievements and efforts of schools, football clubs and individuals who committed their time and effort to promote grassroots football in the Kingdom.

Bjimthangka Primary School was awarded the Grassroots Football School of the Year after conducting more than 55 training sessions which benefited 140 children aged between six to 14 years old. Their coach, Lhap Tshering, was named the Grassroots Football Coach of the Year in the School Category after developing a training schedule based on children’s age and ability.

Tshering Lhendup was named the Grassroots Football Leader of the Year for creating a positive impact on the lives of children through grassroots football activities organised at the Bjimthangka Primary School.

Additionally, Coach Tenzin Chozin from Thimphu City FC took home the same award in the Club Category for guiding the club’s youth team to the U-18 title. His rigorous training methods have helped promote many young players to the senior team at the club.

Ugyen Dorji received the Grassroots Football Volunteer of the Year award after dedicating 144 hours as a volunteer coach and participating in various initiatives such as the Parents Support Volunteer Group, Parents Support Group Match, professional development programmes and volunteering as a referee for the Paro Junior League.

The Paro Junior League 2021, organised as part of the Paro Football Academy’s training programme, received the Grassroots Football Project of the Year award for initiating fun football opportunities for children in their community regardless of their abilities. BFF's Technical Director, Vincent Subramaniam, said: “Our Grassroots football activities in clubs and schools have grown over the years. Therefore, we wanted to recognise their efforts with these awards.”

Certificates of recognition and gifts were awarded to the winners at the BFF Grassroots Football Day celebration at the Changlimithang National Stadium by the BFF Executive Committee Member, Chencho Norbu with the BFF General Secretary Ugyen Wangchhuk also in attendance.

BOB Bhutan Premier League is coming back soon with...