From Humanitarian To Transportation And Tourism Services, Bhutan’s helicopters Have Made 1178 Flights

For the Bhutanese, Lunana remains the top destination with the highlanders having used the services of the choppers more often than any locals. Since the launch of Bhutan’s helicopter service in November 2015, the two A5 choppers have touched more than 300 destinations all across the country.

From Jomotshangkha in Samdrupjongkhar to Sibsoo in Samtse and to the extreme north in Lhedi and Thangza in Lunana, the two A5 choppers have made 1,178 flights as of June this year.

In keeping with its mandate, the two choppers have conducted 442 emergency medical evacuations to date, of which 95 operations were conducted between January and June this year. Until June this year, the choppers have also been deployed on 28 fire-fighting and four airlifting missions of relief materials during floods. They have also performed 66 aerial works for various agencies.

Chief Executive Officer of the Royal Bhutan Helicopter Service Limited (RBHSL), Chewang Gyeltshen said that the company was established with a primary mandate to cater to emergency situations in the country.

In order to boost the sustainability of the company, it also operates charter flights for tourists and locals.

Chopper services most frequently used by the highlanders of Bhutan

For the Bhutanese, Lunana remains the top destination with the highlanders having used the services of the choppers more often than any locals. According to the RBHSL records, as of December 25, it has already operated 239 flights to Lunana. The highlanders hire the chopper service to transport goods and people from the mountains to Punakha at a 50 percent subsidised fare, in addition to another 34 percent deduction offered by the RBHSL.

Lunana’s Tshogpa Pema said that the chopper service has brought untold benefits to the highlanders, reducing a week-long arduous journey across the mountains to just about a mere 30 minutes.

Breakdown of the flight statistics

According to the annual InfoCom and transport statistics with the Information and Communications Ministry, the helicopters have made 463 flights in 2016, 418 in 2017 and 297 as of June this year.

The majority of the flights were local charters, followed by emergency medical evacuations and tourist charters.

Since the chopper service was introduced up until June this year, 301 flights were chartered for tourists. An hour’s flight costs USD 4,375, which was reduced from the initial fare of USD 5,250.

Despite the hefty cost, RBHSL’s CEO said that tourist charter flights have actually gone up by 16 percent. In addition, the company has introduced new services by flying to some of the most iconic destinations in Bhutan. 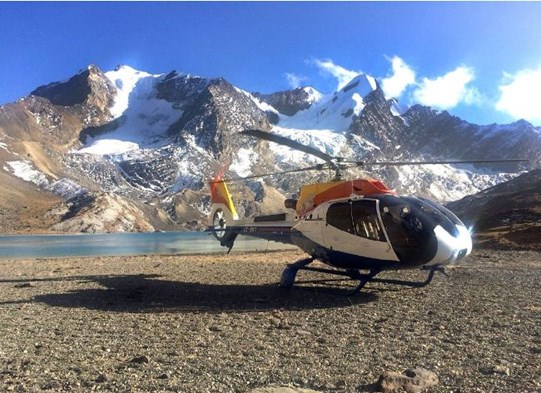 RBHSL, he said is currently testing the market. However, since people have limited disposable income, hiring the chopper is therefore quite expensive.

“What we lose from the emergency services, we try to make it up with commercial flights,” he said.

As per its budget report, the RBHSL suffered a loss of nearly Nu 1M in 2015. This was because the company was set up at the end of the year. However, in 2016, the company declared a net profit of Nu 31M and in the following year the net profit increased by Nu 10M.

Bringing in an additional fleet of chopper(s) is the long-term plan of the RBHSL. In terms of revenue, he said that 2019 will be a decisive year for his company.

“Improving the service is our priority at the moment,” said RBHSL’s CEO.

The RBHS was launched with the primary objective of providing services during medical emergencies and natural disasters...